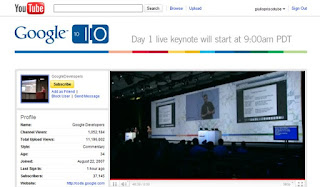 Today I have watched the YouTube webcast of Google I/O 2010.

There are many, many interesting news. One of the most interesting is the announcement of The WebM Project: an open, royalty-free, media file format designed for the web.WebM defines the file container structure, video and audio formats. WebM files consist of video streams compressed with the VP8 video codec and audio streams compressed with the Vorbis audio codec. VP8 is a highly efficient video compression technology that was developed by On2 Technologies. Google acquired On2 in February, 2010. WebM and the codecs it supports (VP8 video and Vorbis audio) require no royalty payments of any kind. 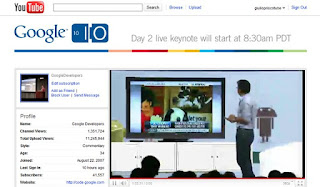 Google Apps now includes Google Wave. It also includes Google Video: companies running their Intranet in the cloud using the business version of Google Apps can easily create their own internal YouTube. But the most interesting development to watch, still a rumor, is Google Meetings: a multiuser videoconferencing application for the Google cloud. If Google Meetings is integrated with the other applications in the Google Apps suite, it could very rapidly become the favorite solution for desktop business videoconferencing and collaboration. 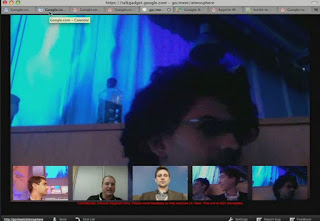 Second day: Android and Google TV, very interesting. See Eric Schmidt Presides Over The Marriage Of The 50-Year-Old TV And The Teenage Web on TechCrunch. They gave a HTC Evo 4G Android phone to all participants, but said that we remote watchers from YouTube don't get any:-( Too bad, because it seems a great phone, especially for the large screen size.
Posted by Unknown at 5/19/2010

Email ThisBlogThis!Share to TwitterShare to FacebookShare to Pinterest
Labels: IT