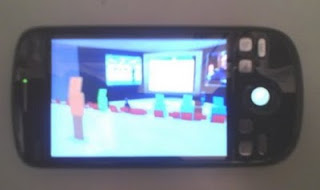 Well... this is actually a picture of a YouTube video recorded in a VR environment (Teleplace), playing on my Android phone. But I believe some kind of limited access to 3D VR worlds is coming to phones soon.

Due to the small screen size, I would not really enjoy VR telepresence on the phone. But the same applications will certainly be deployed to Ipads and similar Android devices with larger screens. Also, magic glasses able to turn a phone screen into a large screen are coming soon to consumer electronics stores.
Posted by Unknown at 5/13/2010

Email ThisBlogThis!Share to TwitterShare to FacebookShare to Pinterest
Labels: IT, virtualreality