Seminar on Transhumanism and Religion in SL

Seminar on Transhumanism and Religion in Second Life 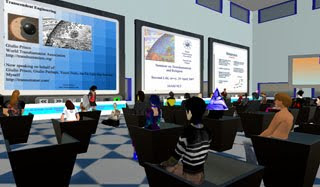 The event was organized by the Second Life Chapter of the World Transhumanist Association.

Extropia Dasilva, Fascinating and Mysterious Virtual Personality. Extropia is a "transhumanist avatar" who writes some of the best mind expanding stuff about first and second life, the universe and everything. Her talk Climbing Technological Mount Improbable is available online.

James Hughes, Executive Director, Institute for Ethics and Emerging Technologies. James presented his paper "The Compatibility of Religious and Transhumanist Views of Metaphysics, Suffering, Virtue and Transcendence in an Enhanced Future" (link).

My presentation started, as usual, with a personal introduction slide where I said that I am with the WTA but am now speaking on behalf of Giulio Prisco, Giulio Perhaps (my avatar in SL), Yours Truly, the Fat Ugly Guy here (my avatar again) and Myself. I presented my own views on transhumanism and religion, which are not and cannot be represented as official WTA views. I think the "cosmic" part of transhumanism *is* an alternative to religion, firmly based on the scientific worldview, but able to provide much of what most people search in a religion. My conclusion: "Our Manifest Destiny: our species will spread to the stars, merge with its technology, and acquire god-like powers. Uploading technology will permit cybernetic immortality with the safeguard of backup copies. With “future magic”, we may find a way one day to bring back all persons who have ever lived. This can be an alternative to religion, based on science, rationality and humanism. I am very interested in the current experimental activities to memetically engineer transhumanist alternatives to religion, based on science, but still able to offer hope in “another life” even for those who are already dead".

Extropia gave, as usual, a very thoughtful and challenging presentation of current trends towards a Singularity and beyond. Her conclusion: "If the technological Singularity is not the summit of Mount Improbable after all, one might ask what is. Will science reveal the answer? Or maybe philosophy? Perhaps theology? Or should we conjecture that these are all manifestations of a grander overarching conceptual framework that we currently cannot comprehend, but may come to appreciate as we ascend to a state that might appropriately be defined as ‘God’? I like to think so!".

James had a monster presentation of interfaces, similarities and differences, and possible cross-talks between transhumanism and religions. James is, of course, a smart politician who knows better than trying to be too explicit on whether transhumanism can or cannot be an alternative to religion. His conclusion: "Transhumanism is potentially compatible with many metaphysics, theodicies, soteriologies and eschatologies. Religious will incorporate the H+ project into their faiths to create trans-spiritualities. The future religious landscape will be much more interesting". This concept of infecting religions with transhumanist memes is not so different from my concept of engineering religions based on transhumanism, and basically similar to an equivalent strategy, often discussed on the lists, to develop a transhumanist memetic presence in political movements.

Lincoln affirmed the basic compatibility between Mormonism and Transhumanism. He stated that the views of the MTA are received "with interest" by the larger Mormon community. His conclusions: "We believe that scientific knowledge and technological power are among the means ordained of God to enable such exaltation, including realization of diverse prophetic visions of transfiguration, immortality, resurrection, renewal of this world, and the discovery and creation of worlds without end". This is, I believe, a perfect explanation of why, despite what fundamentalists may say, transhumanism is not at all incompatible with religion but, on the contrary, each of the two sets of sensibilities can boost the other in a positive feedback loop.

This was a very good event and I was especially pleased to see some of the newcomers join the Second Life Chapter of the WTA.

All speakers with the exception of Extropia used audio streaming for presentations and answers to questions from the audience. James Hughes and Lincoln Cannon used the Shoutcast plugin for Winamp to stream to our Shoutcast server, and I used Nicecast on a Mac to do the same. The technical challenge was the coordination of sound streams coming from different remote locations (basically, the previous speaker has to stop broadcasting, the next speaker must start broadcasting, nobody must start broadcasting at any moment different from the scheduled moment, and an occasional restart of the Shoutcast server may be required). Audio worked very well for James and Lincoln (their voices were crystal clear). It worked very well also for me but with some interruptions (I had to restart broadcasting several times). This was due to a combination of other speakers starting their broadcast while mine was still on and the fact that my Internet connection was not so reliable yesterday.

About 60 persons attended, with a peak audience of 45. There was not too much lag despite uvvy island being only a Class 4 sim.

Extropia's talk was disturbed by a griefer who, of course, was kicked out and banned from the region. He may even have been (you never know) one of the well known outspoken enemies of transhumanism. I can see his point - our ideas *are* a danger for the narrow, fundamentalist mentality they represent.

This page on the uvvy wiki has more pictures and will be updated with pictures, links, transcripts, audio and video clips as they become available.
Posted by Giulio Prisco at 4/29/2007 No comments: