Found via the mailing list of the Society for Universal Immortalism and Cryonet. KurzweilAI.net: Rolling Stone contributor David Kushner's interview with "the world's scariest techno prophet," Ray Kurzweil, "When Man & Machine Merge," appears in the February 19 issue, now on newsstands. See the Cryonet link above for a PDF.

The article is a high level summary of The Singularity is Near, with some very interesting ideas about the universe coming alive with intelligence embodied in computronium, and the possibility to bring back the dead via personality reconstruction based on known information and other people's memories of them. I think the published predictions of Kurzweil, for example a Singularity in 2045 (see below) may be overoptimistic, but I find his bold attitude a welcome and refreshing change from the cautious, timid, watered down, and at times defeatist contemporary "mainstream" transhumanist literature. A Singularity may come a few decades after 2045, or many decades, or never. So what? Mind uploading may not be developed in the 21st century, but only in the 22nd or 23rd. So what? Kurzweil is indicating the road to the future, and a beautiful future it is. Let’s go! Even if we may go slower than Ray hopes.

In our lifetime, Kurzweil believes, machines will not only surpass humans in intelligence - they will irrevocably alter what it means to be human. Cell-size robots will zap disease from our bloodstream. Superintelligent nanotechnology, operating on a molecular scale, will scrub pollution from our atmosphere. Our minds, our skills, our memories, our very consciousness will be backed up on computers -- allowing us, in essence, to live forever, all our data saved by supersmart machines.

Kurzweil is very specific about when this epic shift will take place. By 2045, he predicts, machines and humans will merge, redefining life as we know it. The moment is known as the Singularity, referring to the term used in astrophysics to describe the point inside a black hole wherethe ordinary laws of physics cease to apply. To prepare himself and the rest of the world for the era of conscious machines, Kurzweil has turned himself into the chief prophet of the coming Techno Rapture. "Maybe the Singularity takes a few years longer to get here," he finally replies. "But I cant really imagine that I'm significantly off."

The takeoff starts with computers embedding themselves -- from GPS systems to iPhones -- into the fabric ofour lives. Then, 10 years from now, computing power will finally catch up with our brains. For $ 1000 you'll be able to store as much memory on a chip as you can in your head. Virtual realities -- projected directly onto your retinas -- will become indistinguishable from your own. Kurzweil compares this leap to when humans learned how to fly.

"We will be able to redesign all the systems in our bodies and brains to be far more capable and durable." A person is a mind file. A person is a software program -- a very profound one, and we have no backup. So when our hardware dies, our software dies with it. By scanning ihe contents of your brain, nanobots will be able to transfer everything you know, everything you have ever experienced, into a robot or a virtual reality program. If something happens to your physical body, no problem. Your mind will live on -- forever.

Nanobots will replicate and spread throughout the tiniest recesses of matter, transformingthe host -- say, a tree or a stone -- into a computational device. He calls this intelligence-infested matter "computronium, which is matter and energy organized at optimum level for computation. Using nanotechnology, we're going to turn a rock into a computer." As the nanobots spread computer intelligence beyond our planet, the universe itself will awaken as if a giant switch is finaliy being turned on. "The universe is not conscious -- yet," Kurzweil has written. "But it will be."

Kurzweil slips outhis cellphone and holds it up. "It's now in your pockets, and it will make its way into our bodies and brain," he concludes. All of human progress, he suggests, has been moving toward the moment when we merge with technology, when all of our BlackBerries and Facebook pages and instant messages and Wiis become fully integrated with humanity.

Kurzweil's most ambitious plan for life after the Singularity, however, is also his most personal: Using technology, he plans to bring his dead father back to life. "We can find some of his DNA around his grave site -- that's a lot of information right there," he says. "The AI will send down some nanobots and get some bone or teeth and extract some DNA and put it all together. Then they'Il get some information from my brain and anyone else who still remembers him." When I ask how exactly they'Il extract the knowledge from his brain, Kurzweil bristles, as if the answer should be obvious: "Just send nanobots into mybrain and reconstruct my recollections and memories." The machines will capture everything: the piggyback ride to agrocery store, the bedtime reading of Tom Swift, the moment he and his father rejoiced when the letter of acceptance from MIT arrived. To provide the nanobots with even more information, Kurzweil is safeguarding the boxes of his dad's mementos, so the artificial intelligence has as much data as possibie from which to reconstruct him. Father 2.0 could take many forms, he says, from a virtual reality avatar to fully functioning robot.
Posted by Giulio Prisco at 2/18/2009 No comments: 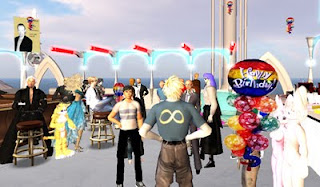 So the "special event" in Second Life that had been announced was Max More's surprise birthday party, which Natasha and I had been organizing in secret. Max had been asked to come to SL to say a few words of introduction for a undisclosed "European thinker, rather well known in the transhumanist community." Even if this description does fit Max, he was indeed surprised. I said a few words about finding his writings online in the mid 90s and how his ideas put my and so many other person's minds on permanent fire, and thanked him. I had asked for volunteers to sing a birthday song but nobody dared, so I sang myself "For He's a Jolly Good Fellow" and wish to apologize to all those whose hearing was permanently damaged. About 55 people came to the party, I am sure many more would have come if we had announced what the event was. Well, I had written "What I can say is this: you should attend! Don't tell me later that I did not warn you!", hadn't I.

See Stephen's Flickr page for many other pictures and the cosmeng.org wiki for the full chat log. This was a surprise social event so don't expect a lecture, but the chat log has many interesting bits on the relationship between Extropy and Transhumanism, the Principles of Extropy (BEST DO IT SO!), the early history of the Extropy Institute, the Bean Dip Catastrophe, religion, Max' forthcoming book and, of course, the future. Bill summarized everyone's feelings: "We want more Max! More Max!"
Posted by Giulio Prisco at 2/01/2009 No comments: