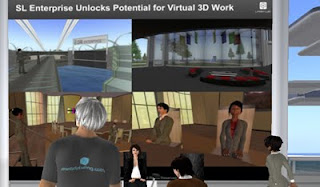 Edited after the Second Life Enterprise presentation to Second Life developers (SLDEV) on November 5, 2009. I have collected the most important facts and the the most interesting blogs here. I expect many corporations and large organizations will be interested in the corporate version of Second Life, running behind the firewall. This will help raising the sex-appeal of the SL platform as a whole. But while the pricing is reasonable and most firms and universities can certainly afford it, I think after the initial investigations many operators may decide that the advantages of SL Enterprise don't justify the extra price, and consider the public Second Life or an OpenSim installation. 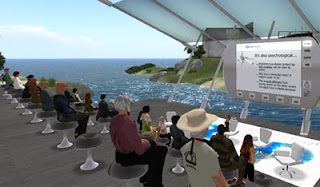 In the last few months, after moving from Spain to Italy, I have hardly ever logged in Second Life -- I have had little time for social events, and no business projects in Second Life. I have been working a lot on projects based on other VR platforms, but for the first time since 2007 my company metafuturing has been in maintenance-only mode in Second Life, with no active development projects. We have been working on 2D e-learning systems, done white label simulator development on several game engines, started building a city for Blue Mars, and doing other IT projects, with no SL work on the horizon.

Like everyone, I have been reading one after another article announcing the death of Second Life, like this blog post on Second Life, imminent death where the well known and respected futurist Ian Pearson commented a Telegraph article on Second Life's span is virtually over as firms decide to get real. But I have never been persuaded that the golden days of the platform were over and always planned to go back to Second Life.

I went back a few days ago, found online my SL friend (and one of the best SL writers and bloggers) Gwyneth Llewelyn, and she invited me to the Beta Business Park Fall 2009 Conference on Leadership in Business, organised by her company Beta Technologies. In the picture, Gwyn speaks to the audience. yes, Gwin speaks (!!!), and with no or very little trace of the Portuguese accent I expected. The conference was great and with many interesting talks and Q/A sessions over 3 days, and confirmed my impression that after 2 years of very bad press, a new Golden Age of Second Life is about to start. This is also confirmed by the growing number of high profile initiatives being (re-)launched in SL.

From metanomics: November 4, 2009, 11:00 a.m. Pacific Standard Time. Mark Kingdon, CEO of Linden Lab, will unveil “Nebraska”, a stand-alone solution based on the technology that runs the popular Second Life virtual world. “Nebraska” is the much-anticipated behind-the-firewall solution which will allow enterprise to host their own virtual world environments within their organizations. Mark will talk about the benefits of the platform, the intended audience, and how it fits into the broader challenges and opportunities of “enterprise 2.0”. Mark will be joined by a number of customers who have used Nebraska during the closed beta phase of development. The panel will explore the benefits, lessons learned, barriers and opportunities which arise from integrating virtual world solutions into the enterprise.

One reason for the bad image of Second Life has been the so-called Flying Phallus Syndrome: most articles about Second Life in the non specialized press are about virtual sex, scandals, financial scams and gambling--even though the last two things are history after Linden Lab has banned SL gambling and unregulated banking, and VR sex may soon follow. Nebraska can provide plausible deniability to corporate operators wishing to experiment with VR based marketing and collaboration without risking Flying Phallus attacks by the press. I think the launch of Nebraska will mark the beginning of the maturity of SL as a platform.

Other bad press against Second Life was mainly due to many corporate operators grossly underestimating the in-house internal effort and commitment necessary to establishing a useful presence in SL, which results in empty islands where nobody ever goes (because, of course, nothing ever happens and there is no reason to go there). I have authored a chapter for a book on VR worlds, to be published by Springer in the Human-Computer Interaction Series, where I wrote: It is often said that many corporate headquarters and initiatives in Second Life are always empty of visitors and “desert,” which is often true and due to a deep lack of understanding of new media by the business sector. On the contrary, many “home-made” virtual environments in Second Life, spontaneously created by users for fun, are vibrant communities always full of enthusiast regulars and visitors... it takes a lot of work and dedication to build a virtual community, and most companies and academic departments just don’t have the necessary resources and are not able to move fast enough. My experience is that, in order to build a successful VR environment with a positive impact on the core business, whatever that is, operational issues must be discussed with the client and taken into account at design stage.

One of our 2007 clients recently closed their very expensive SL facility after two years of desertification. They went to SL in the Golden Age only for the press, and (bad) press is what they got. Another more recent client started after the Golden Age, never cared about the sensationalist press, and created a very successful and useful corporate VR Intranet for internal use: Second Life is, simply, one of the best VR platforms available and permits all sorts of VR collaboration and V-learning initiatives. My main interest is using VR environments to permit real, effective collaboration and learning to geographically distributed communities, and Second Life is one of the few platforms able to offer a solution.

With some needed technical enhancements (eg mesh import from leading 3D design tools, full support for web content, more streaming video formats, webcam support, collaborative editing of office documents), SL may soon start having a real and growing impact on marketing, business and education. The Second Life platform will have many different instances: a public instance run by Linden Lab (the evolution of the current SL), commercial Intranet instances like Nebraska and Immersive Workspaces, and of course the open source OpenSim which is, I think, where most innovation will be developed. The consumer VR market has many players already (my current favorites besides SL: Teleplace, Moondus, Blue Mars). Each will specialize in one or another niche but some consolidation phase seems inevitable, and I think the Second Life platform will be one of the winners.

I will restart recommending Second Life (in the wide sense) as a viable solution to corporate and educational clients, and organizing cultural events in SL. The Transvision 2010 conference will have an important mixed relity component in Second Life, and we are about to launch a major e-learning initiative with a SL component (watch this space for details).
Posted by Giulio Prisco at 10/31/2009 No comments: