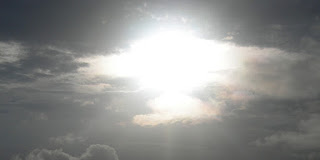 My essay Transcendent Engineering ha just been published on the Terasem Journal of Personal Cyberconsciousness. A version of the essay is forthcoming in the Transhumanist Reader edited by Max More and Natasha Vita-More.

The image above is part of a beautiful picture taken by Terasem editor Lori Rhodes to illustrate the article. Thanks Lori!

Expanding previous essays, I argue that science may someday develop the capability to resurrect the dead and build (and/or become) God(s), and propose to base a transhumanist religion (or, better, mythology) on this idea.

Discussion: you are welcome to join the ongoing conversation on the Turing Church Facebook group and/or the IEET site: Transcendent Engineering - IEET
Posted by Giulio Prisco at 12/28/2011 2 comments: 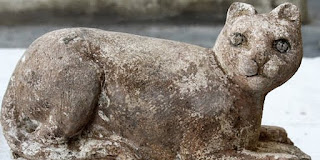 I have often used the almost equivalent term "Time Scanning", but I see that more and more people are using "Quantum Archaeology". A short definition:

Quantum Archaeology is a set of hypothetical far future technologies that, presumably through the application of yet undiscovered quantum effects, will permit reconstructing past events up to any desired resolution in space and time. In particular, Quantum Archaeology will permit reconstructing the life, thoughts, memories and feelings of any person in the past, up to any desired level of detail, and thus resurrecting the original person via "copying to the future."

See this discussion on the KurzweilAI Forum. or search the Forum. QA is frequently discussed there, and Forum member eldras maintains an excellent Quantum Archaeology page with references.

A practical analogy for QA:

A few weeks ago I wiped clean an old website of mine (I deleted everything, html and php pages, and the entire mysql database). Only yesterday I realized that I had deleted the only existing copy of an article that I wrote in 2005 jointly with one of my favorite SF writers. The article was dead, and with no backup copies anywhere. I was really mad.

Then today I thought that perhaps the (Holy?) Ghost in the Machine (Internet) had made a backup copy of the article. I found a copy on the Internet Archive, incomplete but good enough as a starting point for reconstruction (resurrection).

So I have resurrected the article. It has taken some work, but here it is, and I think some people here may like it:

Shadows and the concept of self
By Giulio Prisco and Richard L. Miller

We die, and if we have no backup copies (e.g. a chemically preserved brain, a frozen body, a mindfile) our death is irreversible.

Perhaps the machinery of the universe creates backup copies, and if our descendants (or aliens, or AIs) find our backup copies, they will be able to resurrect us.

How? Some preliminary thoughts:

1) Other times are special cases of other universes (other branches of the MWI multiverse). If quantum entanglement extends across time, then it should be possible to find present systems correlated to past systems.

2) In the MWI there is no collapse of the state vector that irreversibly discards information. This should imply that information is preserved in the multiverse. 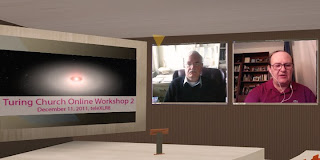 In the picture above taken in teleXLR8 I am with Frank Tipler, in a preparation meeting for the Turing Church Online Workshop 2. I am a big Tipler fan, see for example Interview with Frank. J. Tipler (Nov. 2002), and Review of The Physics of Christianity, by Frank Tipler.

Frank gave a great talk at the Workshop (see also this video for the full Q/A session).

Quotes from Tipler’s talk and Q/A:

“If we don’t move into space, if we and our downloads and our art int siblings do not move into space, the entire biosphere is doomed. if we are so foolish as to remain on the planet earth then we and the entire biosphere will be annihilated. Fortunately I don’t expect this to happen, I expect that the human race and its artificial intelligences and downloads will eventually move out into space and ultimately take over the universe.”

“General relativity is really Newtonian mechanics made consistent with the idea that the speed of light is the same for all observers, which is an automatic consequence of maxwell’s equations.”

“As it was proved by the great mathematician Elie Cartan in the 1920s, gravity is curvature for Newton also, and once you combine that with the insights of Enstein and Lorentz then the Newtonian equations automatically become the Einstein equations.”
Ref.: General Relativity As an Aether Theory, arxiv.org/pdf/1007.4572

“Quantum mechanics really is a subset of Newtonian mechanics in its most general form called Hamilton-Jacobi theory, that means there was no scientific revolution in the 1920.”
Ref.: Hamilton-Jacobi Many-Worlds Theory and the Heisenberg Uncertainty Principle, arxiv.org/abs/1007.4566

“We already have a theory of everything.”

He says that lack holes cannot evaporate because of unitarity, but in an ever expanding universe they would necessarily evaporate, which would violate the laws of physics.

He concludes that it is not possible for the universe to expand forever, it must eventually expand to a max size and then re-contract. but this would also lead to contradictions with thermodynamics. Only one possible re-contraction mechanism is consistent with all the laws of physics:

“Only this makes the laws of physics mutually consistent.”

“The laws of physics have dictated that we will survive.”

“If the laws of physics are for us, for the biosphere, for the eventual existence of human downloads and the eventual exist of artificial intelligence, what on earth can be against us. Inevitably we will take over the entire universe.”

“As we approach the final singularity, the laws of physics also dictate that our knowledge and computing capacity is expanding without limits. Eventually it will become possible to emulate, to make a perfect copy of, every previous state of the entire universe.”

“Since the computer capacity must by the laws of physics expand without limits as we are going into the final singularity, that means these emulations can also continue to exist forever and also interact with the various versions of themselves.”

“When we emulate basically all possibilities consistent with the laws of physics, we will actually get the particular one of you and I which are actually here in this auditorium.”

“These all possibilities are already there currently. This is called the many worlds interpretation of quantum mechanics, but I claim it is not one interpretation, it is really the only interpretation consistent with the laws of physics.”

“The expansion of the universe will be turned off by our human download descendants plus our artificial intelligence siblings.”

“The universe cannot expand forever because this would be inconsistent with the laws of physics.”

“Christianity can be experimentally confirmed.”

The other speakers, James Hughes, Martine Rothblatt, Remi Sussan, Lincoln Cannon, Brent Allsop, Dan Massey, Mike Perry, Andrew Warner, Fred & Linda Chamberlain, and Ben Goertzel, gave great talks. The full videos of all talks and Q/A sessions are available online. The Workshop explored transhumanist spirituality and “Religion 2.0″, the convergence of science and religion, highly imaginative future science and technologies for resurrection, emerging science and technologies for immortality, social and memetic engineering. It was held on December 11, 2011, the 10th anniversary of the death of my mother, and I cannot think of a better memorial.

I could not deliver my own talk because my Internet connection was vary bad (it has been very bad for a few weeks after a power surge that must have damaged something in the router). The slides of my presentation are below. 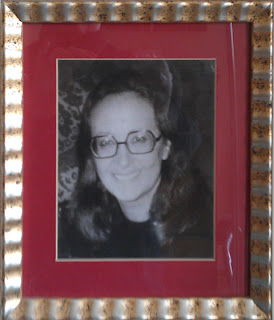