On Friday 20 and Saturday 21 November, 2009, we had the first coordination meeting of European Transhumanist Associations, hosted by the Italian Transhumanist Association for the Euro transhumanists group. Thanks to the group founder for coordinating the group and moderating the meeting, and thanks to Stefano Vaj for hosting both the meeting and the mixer dinner on Friday night (and, of course, for his own many contributions to the program). 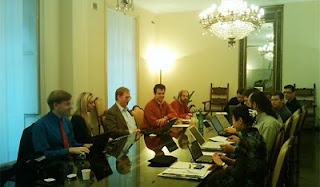 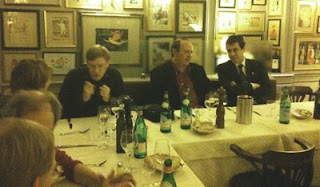 I most certainly look forward to having the opportunity to participate in foresight projects led by public administrations at European and national levels. Governments and administrations need good, timely and accurate advice on scientifical, technological and social trends, and many persons and groups in the transhumanist community are well positioned to provide such advice, with that extra touch of imagination that is often missing from public policy discourse. Of course I fully understand that such projects are not the best place to promote the more visionary and long-term transhumanist ideas (you know, immortality indefinite lifespan, mind uploading and all that). If I contribute to public foresight projects, I promise to behave and focus on issues relevant to the scope of current public policy and within my own areas of expertise, and leave visionary cosmist speculations aside. But, and it is an important but, without renouncing my ideas. I am not ashamed of being a transhumanist, on the contrary I am proud of it. I think it is perfectly possible to be a pragmatic technology expert and policy advisor, a concerned citizen, and a wild cosmist visionary at the same time, and to wear each hat as and when appropriate to the situation at hand.

On the other hand and more generally, I don't believe in "appeasing critics", but in being true to one's ideas and promoting them as forcefully as needed. Transhumanism is radical, disruptive, subversive, and revolutionary: so be it. Not kissing ass, but kicking ass. At the same time I think our ideas are beautiful, and I wish to offer them to the world and to reach as many persons as possible. Of course I realize this needs a careful framing and wording of our message, but without diluting its core meaning. The tension between the two souls of transhumanism, moderate and radical, pragmatic and visionary, was evident at this meeting, but I continue to believe that there should be no tension.

This was a physical meeting in good old brickspace (only Russian transhumanists attended via Skype teleconferencing). I am all for telework and telepresence, and my company will offer advanced telework and telepresence tools for future meetings of this and other groups, but I realize that face to face interaction is still better, and that telecollaboration is most effective when participants also know each and meet other face to face. Telepresence is not (yet) a replacement for physical presence, but a (more and more) useful complement. David Wood of Extrobritannia spoke of their monthly meetings in London, a successful initiative that should be replicated in other places, also with webcast and telepresence options.

The idea of a transhumanist think tank think tank powered by transhumanists, of course with the caveats above, has re-surfaced. The Institute for Ethics and Emerging Technologies is a good role model. A few years ago many transhumanists started a working group to define and build a think tank called FutureTAG (Future Technologies Advisory Group): A consulting and media group focused on promoting awareness and understanding of radical scientific advances and emerging technologies, as well as evaluating their impact on individuals, businesses and societies. While one of the objectives of the firm will be facilitating the penetration of transhumanist ideas in mainstream business and policy, we will not use the T word or insist on the transhumanist worldview too explicitly. Rather, we will focus on delivering practical advice appropriate to the intended audience. FutureTAG has produced several spinoffs (my own company is one), but it has not been active recently. Perhaps this is a good moment to reload the initiative? The mailing list is still live.

Politics (of course): there are new and emergent political forces whose core values and goals are definitely compatible with transhumanism, and which in turn share (or may be persuaded to share) transhumanist core value and ideas. There are interesting initiatives in this direction, and in general it is interesting to open a dialogue with new emergent political forces, very carefully as they might fear attempts to hijack them. I prefer not to go into details here, but there are interesting initiatives ongoing.

The strong, militant language used in the European Transhumanist Front website of Riccardo Campa leaves some participants uneasy, and I can perfectly understand why: the bold, provocative, radically Futurist stance of many Italian transhumanists, and the recent debates about its political roots, can trigger some fears. Yet, what is transhumanism but a permanent war against all limits? I endorse most of the Front's website content, especially: we do not cater to the idea that transhumanism's first concern should be that of appeasing the fears of neoluddites, comply with western political correctness, or struggle for a "respectability" that would only be the mark of irrelevance. "Compromises", "tradeoffs" and "doublespeak" are the tools-in-trade of governments, politicians, bureaucrats, diplomats, entrepreneurs. Not of lobbies, visionaries, think tanks or grass-roots movements... We see transhumanism as a metapolitical, social and cultural struggle, aimed at a revolutionary change of our way of life on the scale of the neolithic revolution, and in the shorter term fighting for self-determination and access to technology, against prohibitionist policies at a national as well as at an international level. Bravo!

German cryonicists gave a very interesting presentation, but most participants do not see cryonics as a core transhumanist issue at this moment. Yet, cryonics is all about self-ownership and self-determination, central transhumanist values which everyone supports, or should support.

In summary, a very interesting and productive summit meeting which we intend to repeat in 2010. At least three other important transhumanist events will be held in Europe in 2010: a one day event in the UK, Miriam's conference, and our own Transvision 2010.
Posted by Giulio Prisco at 11/22/2009 No comments: