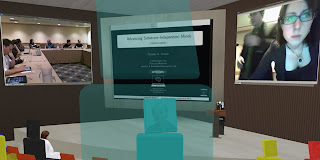 About 30 persons attended the ASIM 2010 Conference, Advancing Substrate-Independent Minds, satellite to the Singularity Summit 2010, San Francisco, August 16-17th. Besides the participants in San Francisco, about 25 remote participants attended online in Teleplace. The two main organizers Randal A. Koene and Suzanne Gildert appear in the image above (right screen).

The interactive live streaming of the ASIM 2010 Conference has been covered by KurzweilAI News (TOP STORY of today): Advancing Substrate-Independent Minds conference to be streamed live. I think this has been a really excellent mixed-reality event (see below).

Previously the subject of the conference had been described by KurzweilAI as: "What might brains and minds look like in the future? It can be difficult to manage and organize ideas from many highly specialized fields of expertise that must necessarily converge to answer this intriguing question. Not only must one consider the areas of brain imaging, neuroscience, and cognitive psychology, but also artificial intelligence, nanotechnology, biotechnology, computational hardware architectures, and philosophy.

In the past, the transferal of minds into computer-based systems has been rather vaguely referred to as “uploading.” However, those hoping to advance this multidisciplinary field of research prefer to use the term Advancing Substrate Independent Minds (ASIM), to emphasize a more scientific, and less science-fiction approach to creating emulations of human brains in non-biological substrates. The term ASIM captures the fact that there are several ways in which hardware and software may be used to run algorithms that mimic the human brain, and that there are many different approaches that can be used to realize this end goal. On May 22, 2010, carboncopies was born in an effort to unite the disparate areas of research contributing to ASIM..."

Note: the term ASIM provides some plausible deniability to serious scientists, which is very useful. But I am not a serious scientist, and I think I will continue to use the good old term Mind Uploading. It is deliciously retro with a flavor of the wild, visionary, irresponsible and unPC transhumanism of the 90s. I am persuaded that future science and technology will permit achieving our wildest dreams, including mind uploading. In the meantime, the ASIM project will contribute to advancing step by step and developing enabling technologies.

Fundamental Issues – Resolution & Scale, “Me” Programs, by Randal A. Koene
Actionable Approaches – ASIM Now, by Peter Passaro (talk given via Teleplace)
ASIM in Context – Ongoing Advances in neuroprosthetics, AGI, Cyber-augmentation, embodiment, VR, etc., by Monica Anderson
Remote participants in Teleplace were able to follow the talks via interactive video streaming, ask questions to the speakers, and contribute to the discussion. Two speakers (Peter Passaro on Day 2 and Ken Hayworth on Day 1) gave their talks via Teleplace. After attending both days of the conference remotely in Teleplace, I am very happy with the performance of the Teleplace system as a means to open up conferences to a global remote audience in “mixed reality”, with crisp video and audio (after properly setting up the microphones) and deep interactivity for all participants. I have participated in ASIM 2010 from the middle of nowhere in Central Europe, with a 3G phone link to the Internet and a very weak signal (in other words, my current Internet connection is VERY slow). Even with this poor connection, I have been able to participate in ASIM 2010 without any problem. There are, of course, special problems to deal with in mixed reality events. For example, in the first half of Day 2 remote participants could not hear well the on-site participants far from the microphone. In future events, we will use cordless microphones to give to on-site participants when they want to say something. In this case, the problem was solved by asking on-site participants to go to the microphone to comment and ask questions. Mixed reality via the professional and social collaboration platform Teleplace permits merging on-site and remote participants in one virtual group, and it is the best way to open up a conference to remote participants that I have seen. The 2-way video and audio link enables each participant, on-site or remote, to be seen and heard by all other participants, on-site or remote.
Posted by Giulio Prisco at 8/18/2010 3 comments: 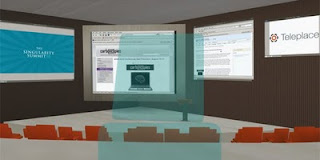 If you cannot be in San Francisco next Monday and Tuesday you can virtually attend in telepresence the Advancing Substrate-Independent Minds (ASIM-2010) conference, the satellite to the Singularity Summit arranged by carboncopies.org, focusing on the potential ways to realise substrate independent minds. The conference will take place on the 16th and 17th of August, in the evenings (after the Singularity Summit workshop sessions) at the Hyatt Regency Hotel in downtown San Francisco.

Those who already have a Teleplace account for teleXLR8 can just show up at the conference, others who wish to attend should contact the organizers. Note for European participants: the time is PST - the conference starts at 4am (in the middle of the night) continental EU time, 3am UK, on August 17 and 18 (the night between Mon and Tue for the first session, the night between Tue and Wed for the second session). Note for new participants: please read our Practical Teleplace Help page for new users.

This ASIM conference is the first of its kind, with previous workshops being held online. We are hoping that the enthusiasm for the topics and the discussion sessions displayed during these online events will carry over to the real life workshop. The conference has a practical, action-oriented structure that is aimed at inciting discussion rather than dissemination of points of view. Topics on day one (August 16th) and day two (August 17th) are divided into distinct categories: Day 1 - Practical and Immediately Actionable Directions. Day 2 - Fundamental and Long-term Considerations.

Several participants and speakers will be joining us remotely via Teleplace software, an increasingly useful virtual conferencing tool. The conference will also be webcast live using the same software. If any attendees have friends or colleagues who are unable to attend the real-life conference but would like to join us remotely, please contact us for information on how to set up a Teleplace account.

This formula permits full 2-way interaction between two groups of participants, those physically present at the conference, and those attending in telepresence ("mixed reality"). Through a combination of 2-way video and audio feeds, each participant in either group will be able to see and hear participants in the other group. In particular, speakers and participants attending via Teleplace will be able to give presentations, ask questions to other speakers, and participate in the discussions.

See Carboncopies–Realistic Routes to Substrate-Independent Minds on KurzweilAI: Advancing Substrate-Independent Minds 2010 (ASIM-2010) to be held after Singularity Summit. In addition to the virtual events, carboncopies is holding an official launching conference in real life: Advancing Substrate-Independent Minds (ASIM-2010) will take place at the Hyatt Regency in San Francisco on August 16 & 17, 2010, immediately after the Singularity Summit. A virtual link will also be provided for those who wish to attend remotely. Please join us in person, or through virtual presence in Teleplace on August 16 and 17, 2010, for an action-oriented event aimed at advancing substrate-independent minds. Contact us to find out more about each option. Regarding the ASIM-2010 conference, all are welcome and there is no registration fee -- although donations to offset our expenses are greatly appreciated. Please RSVP the organizers to secure your seat.
Posted by Giulio Prisco at 8/12/2010 1 comment: