UPDATE: My talk at the Humanity+ community event in Second Life 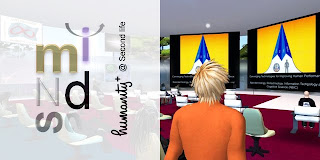 Humanity+ is hosting a virtual event in Second Life on September 15, in a week!

Humanity+ is an international nonprofit membership organization which advocates the ethical use of technology to expand human capacities. We support the development of and access to new technologies that enable everyone to enjoy better minds, better bodies and better lives.

Join us in Second Life to brainstorm how to move forward together!

More info on the event on the Humanity+ and KurzweilAI websites.

IMPORTANT NOTE for those who have never used Second Life, and for those who are not familiar with it. Everyone can create a free Second Life account, just go to the Second Life website. You should not expect to be a Second Life pro immediately after creating your account, but on the contrary you should take some time to "get it" and practice the user interface. It is very easy and everyone should be able to learn the basics in half an hour, but like everything it has a learning curve. So, please create your avatar and practice SL before the meeting. You should also learn how to "teleport" to Terasem Island in Second Life (coordinates: 121:155:30). We are available to help. I will use the avatar Eschatoon Magic, feel free to IM me if you have problems.

Click this SLURL to teleport to the event site
Posted by Giulio Prisco at 8/31/2011 2 comments: 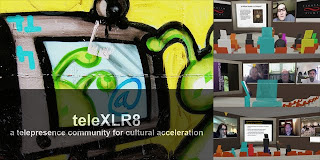 The teleXLR8 online talk program based on OpenQwaq has been covered by Hypergrid Business “as an online open TED, using modern telepresence technology for ideas worth spreading, and as a next generation, fully interactive TV network with a participative audience.“

At the end of 2010 the teleXLR8 project, based on the industrial strength commercial Teleplace platform, was put on hold waiting for funding.

In May 2011 Teleplace made the visionary decision to open source their technology as OpenQwaq. This permits continuing teleXLR8 as a free, invitation-only program based on OpenQwaq, with more frequent talks, workshops and conferences.

In August 2011 the teleXLR8 project has been re-launched. See my short presentation Welcome to the 2011 season! The first talk has been announced by KurzweilAI: “teleXLR8 is reopening on Sunday 21 10 a.m. PST with a talk by [experimental quantum physicist/programmer] Suzanne Gildert on Hack the Multiverse!. The teleXLR8 online talk program is “a telepresence community for cultural acceleration,” as their blog puts it. Translation: an audiovideo seminar — think TED in Second Life, plus webcam videoconferencing and video session recording."

Suzanne outlined the basics of Quantum Computing, described the the D-Wave One quantum computer, and explained how to program it. For those who missed the talk, the full video coverage is on the teleXLR8 video channel on YouTube.

The teleXLR8 project will continue with more frequent talks, seminars, online conferences and mixed-reality extension of traditional conferences, interviews, talk shows, and e-learning courses. Thanks to the built-in video recording feature of OpenQwaq, we will post the full video coverage to our video sharing channels on Blip.tv, Youtube and Vimeo after a few days. Participation in the realtime interactive sessions is free, but invitation-only: if you wish to participate, please contact us, join the mailing list or the groups on Facebook and Linkedin, and ask for an invitation.

Socrates Had Haemorrhoids and Diarrhea

Initially published as a comment to Mike Treder's excellent article Will you die? @ IEET.

I just found this gem of our old friend Carrico. He criticises this article because "That you are going to die is part of what it has always meant to be human..."

Inspired by previous debates (see below) I have taken the liberty to re-write his apology of death, changing a couple of words:

Mike Treder, Managing Director of the Institute for Ethics and Emerging Technologies (long-time readers may recall that I tend to call it "stealth Robot Cult outfit, IEET" and tend to call its high level muckety mucks as "Very Serious Futurologists" or, alternatively, "White Guys of 'The Future'"), asked the question in a post yesterday, Will You Continue to Have Haemorrhoids and Diarrhea? (The answer, for you kids keeping score at home, is: "Yes, Mike, yes, you will continue to have haemorrhoids and diarrhea, as will every single person who reads these words.")

It doesn't seem right to make fun of people this desperate and deluded and dumb, but, well, I say, go ahead. Especially rich for regular readers will be the robotic predictability with which the Robot Cultists and the industrial-militarist complex continue to announce the arrival of a Cure For Haemorrhoids and Diarrhea, Artificial Intelligence, Drexlerian Nanotech, Designer Babies, Clone Armies, Immersive VR, the Paperless Office, Energy Too Cheap to Meter, Orbital Space Hotels, the Cure for [insert disease], and the history-shattering Singularity when the Robot God inaugurates Tech-Heaven or eats the world for lunch (you decide). No less enjoyable is the accompanying illustration for the piece of drawing-board nanobots on graph paper backgrounds just like real engineers use and with orange arrows indicating the immortalization action, and also, too, the reference to cyber-immortalization via "uploading" presumably involving something called your "essence." Science!

It is interesting to note that in previous debates Carrico has, instead, considered haemorrhoids, diarrhea and similar things related to what he considers as the noblest parts of the sacred human anatomy and the holy human biology as better examples of your "essence." See for example:
Cyborg Angels Live Forever and Never Ever Have to Poop
The Power of Poop; or, Prisco Responds

Dale, my boy, please feel free to live a legibly human life and to pursue happiness and meaning your own way. If this means continuing to suffer from haemorrhoids, diarrhea and death, so be it. I would not wish these things upon my worse enemy, but you are the best judge of what is good for you and makes you happy.

But I hope you will forgive me for choosing to do my best to avoid haemorrhoids and diarrhea. And death. If these things must remain part of legibly human lives, then fuck legibly human lives.
Posted by Giulio Prisco at 8/20/2011 5 comments: 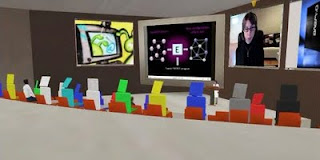 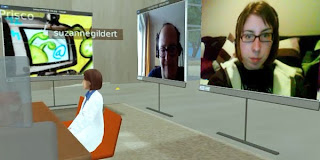 See also, on the teleXLR8 website: Suzanne Gildert on Hack the Multiverse!, OpenQwaq, August 21 2011 , and Welcome to the 2011 season!

I am very much in love with both my two favorite virtual meeting technologies: Second Life, partly cloned by the open source OpenSim, and Teleplace, recently open sourced as OpenQwaq. In the pictures, two recent online conferences in Second Life and Teleplace. 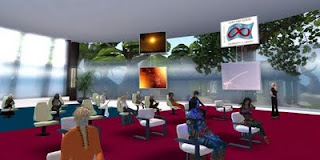 I love both, but most VR users tend to strongly prefer one. I am interested in "serious" applications to, for example, online talks and e-learning (no value judgment intended, and please see "Telepresence Education for a Smarter World" for more), and I like both. 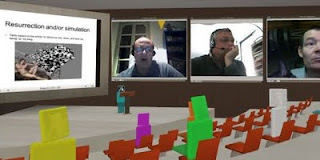 The Teleplace / OpenQwaq technology, on which my teleXLR8 online talk program and "telepresence community for cultural acceleration" is based, has much better built-in voice and support for multi user collaboration, document sharing and webcam videoconferencing, all very important features for "serious" applications, but those who prefer Second Life may find it too aseptic and square.

The Second Life / OpenSim technology, much closer to (and directly inspired by) the Metaverse of Snow Crash, has a certain built-in playfulness which is also very important (more important than I used to think) for "serious" applications, and is much more appealing to persons with strong artistic sensibilities, but those who prefer Teleplace may find its more, um, extreme aspects too annoying and distracting.

As I said, I like both. The "conflict" is mostly cultural and psychological, and I have no doubts that both technologies, especially in their open source versions, can easily support both work and play in both square and creative modes. For example, I have prototyped simple examples of videoconferencing and collaborative document sharing in Second Life, and OpenQwaq can import very creative 3D models and avatars.

On pseudonymous identities on the Internet

One month after the introduction of Google+, the debate on "real vs fake identities" goes on. I see a lot of that on Google+ and Facebook because I have many Second Life users in my network, and many of them have chosen to be pseudonymous.

I have written an article on pseudonymous identities on the Space Collective website (I prefer to write long articles elsewhere and post excerpts here). Excerpt:

I often voice my very deep concerns about our once free Internet becoming the property of nanny states and greedy corporations, and I think we must protect the Internet at all times. Our society is becoming a global nanny state and a dictatorship of self-righteous control freaks and idiotic "moral majorities", and we should keep and protect at least some pockets of personal freedom and privacy online.

Or else (see below). At this moment I am not affected by real-dentities-only policies, because I chose to represent myself via my legal name anyway. I must also confess that, sometimes, I am mildly annoyed by some aspects of my pseudonymous friends' behavior. But I am happy to accept a moderate level of annoyance for the privilege of living in a free society, and I try to be tolerant of others' little annoying habits because I hope they will be equally tolerant of mine. And I remember "First they came..."

Read the rest on Space Collective...

PS Today is the 20th birthday of the World Wide Web and we MUST NOT FORGET that the Web was "Born out the dreams of Libertarian hippies in 1970s California, and the anti-authoritarian aspirations of internet-pioneers." We must keep the spirit alive.
Posted by Giulio Prisco at 8/06/2011 No comments: