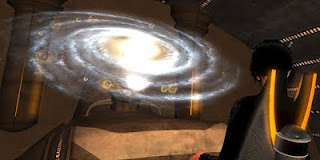 My article "Engineering Transcendence: Addendum from 2011" has just been published on H+ Magazine. In this sequel to my old article "Engineering Transcendence" I discuss transhumanist spirituality, its parallels with religions and its potential as a better alternative to religion. The inspiring picture above is taken from Extropia DaSilva's very good follow-up post, also posted to KurzweilAI Forums with some interesting comments.
Posted by Giulio Prisco at 6/28/2011 2 comments:

Back to the 60s, back to the future, and onwards to the stars 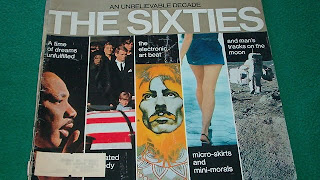 I am honored of having been included in the 200th episode of The Future And You: "Over a hundred never before heard predictions about the future from dozens of past guests, a few possible future guests, several listeners and an assortment of people actively building the future we are all going to live in."

Stephen Euin Cobb's question for the 200th episode was: "The next episode of my show (The Future And You) will be the 200th episode. If you would, please send me a prediction of the future I can read into the show. Especially good would be a prediction based on a trend most people have been ignoring or just not aware of."

The main point that I made in my own trend spotting is: "...Sadly my short term predictions are far less optimistic, at least as far as the future of our "western" society is concerned. I see that we are becoming old, ossified, with far too much obsession for safety, control and political correctness, like old people afraid of their own shadows in a safe, PC and sad retirement home..."

I have written an article on Space Collective to elaborates on this. I conclude with "I think the free spirit of the anti-authoritarian 60s, the hippie and New Age movements, the cultural and social experimentation and the widespread protests were healthier than our contemporary, geriatric western societies... Let's go back to the 60s, back to freedom, back to the future, back to space, forward to the next phase of our evolution as a species, and onwards to the stars!" Read the rest on Space collective...
Posted by Giulio Prisco at 6/28/2011 No comments:

What the fuck is wrong with magical thinking? It is what got Columbus to America.

This has been my first reaction to the article What’s the Likelihood of the Singularity? Part One: Artificial Intelligence, by Alex Knapp on Forbes.

Note on mind uplaoding: The second part of the article What’s the Likelihood of the Singularity? Part Two: Uploading the Brain is just out. I will just make one comment at this moment: denying the possibility of mind uploading is crude dualism, because it assumes that carbon biology has some mystical property that science will never be able to explain and engineering will never be able to replicate and improve. With this attitude, we would be still living in caves. I will to comment to both articles and I have just created an account on Forbes.

Both articles are inspired by an article by Charlie Stross on Three arguments against the singularity. The article is very interesting and written by someone who understands these things much better than Knapp. I just left this comment:

Charlie, I am more optimist than you on the feasibility of and timeline for strong AI and mind uploading, but I am probably closer to your cautious assessment than to the wild optimism of, say, Kurzweil. I think both technologies will be developed someday because they are compatible with our scientific understanding of reality, but not very soon.

In reply to: "I can't disprove [the Simulation Argument], either. And it has a deeper-than-superficial appeal, insofar as it offers a deity-free afterlife... it would make a good free-form framework for a postmodern high-tech religion. Unfortunately it seems to be unfalsifiable, at least by the inmates (us)."

My question is, what is wrong with this. Some persons function better _in this life_ if they can persuade themselves to contemplate the possibility of an afterlife compatible with the scientific worldview. They become happier and better persons, help others, and try to make the world a better place.

In other words, the pursuit of personal happiness without harming others. Charlie, what the fuck is wrong with this?

Read Charlie's reply and many other interesting comments on Charlie's blog.

Now also the third article of Knapp's series is out: What’s the Likelihood of the Singularity? Part Three: A Simulated World. There is an interesting discussion on quantum mechanics, of all things. My last comment:

According to the Copenhagen interpretation of quantum mechanics, the universe does not compute things that nobody is observing, but leaves them in a undetermined state to be defined only when somebody actually observes them. This makes sense from a computational perspective (why waste useful resources to compute useless things?) and this is why we use the same strategy in our own synthetic worlds like World of Warcraft. So, without stretching the analogy too far, I rather consider quantum mechanics as suggestive evidence in favor of a simulation theory.
Posted by Giulio Prisco at 6/25/2011 No comments:

Bitcoin: a CryptoCurrency for a free Internet and a free society 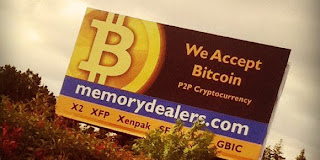 Some info, linke and thoughts on Bitcoin: a CryptoCurrency for a free Internet and a free society: "I think Bitcoin is important. We must protect the Internet and the right to free speech, pseudonimity and anonimity online, and we need a untraceable anonymous currency. Of course I realize that Bitcoin can also be used by bad people to do bad things, but I am sure it will be mainly used by good people to do good things, and I think the benefits outweigh the dangers. All things considered, I prefer to live in a world with untraceable anonymous currency than in a world without."

Read more on Space Collective
Posted by Giulio Prisco at 6/07/2011 No comments:

Join the free Diaspora and build YOUR mindfile

I have a post on Join the free Diaspora and build YOUR mindfile on the Space Collective website Some excerpts:

Eventually, Diaspora may become a social web: a large decentralized network of pods operated by different individual and groups, linked by common protocols, and able to deliver all the things (friends, status updates, chat, groups, pictures, video, like, unlike, share...) that we have in Facebook and many more.

Once you are connected to users on other pods, you see their activity in almost real time like if they were on the same pod. If the Diaspora network takes off and achieves critical mass, it will be an open, decentralized, distributed P2P social web.

Billions of digital natives born in the 00s will have deep and detailed records of their lives, thoughts, feelings and personalities, on future social networks. According to the Bainbridge-Rothblatt hypotesis which seems more and more plausible in light of recent scientific advances, sufficiently advanced future technologies may be able to ignite these "mindfiles" and bring them back to life.

Read more on Space Collective.
Posted by Giulio Prisco at 6/06/2011 No comments:

VIDEO – teleXLR8 highlights 2010 (with info, long version, links to the same video also on Blip.tv and Vimeo).
Posted by Giulio Prisco at 6/01/2011 No comments: