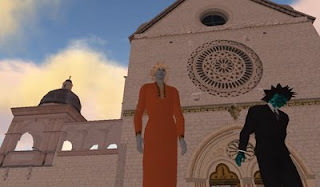 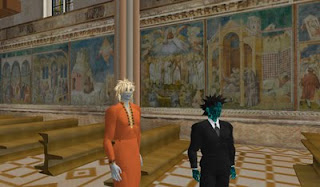 We talked of transhumanism, religion, the relevance and impact of virtual worlds for both, the many transhumanist organizations (too many? No. I am for let many flowers bloom, small is beautiful, and I am very much against all kinds of centralization, so I certainly do not think there are too many transhumanist organizations). We discussed many transhumanist organizations and in particular the Society for Universal Immortalism, the Mormon Transhumanist Association and, of course, the Order of Cosmic Engineers, and discussed our plans for the growth of the Order of Cosmic Engineers once it goes out of stealth mode in a few weeks. I told him that, in my opinion, the Order's program makes a lot of sense as a cosmic engineering program for the future, but also as a memetic engineering program for here and now: showing people how to find again a sense of wonder, a feeling of happiness and a vision of one's own place in a universe-wide cosmic engineering project, that used to be offered by traditional religions, but without renouncing reason and science.
Posted by Giulio Prisco at 8/19/2008 No comments:

The New God Argument at Sunstone 2008

I am awed by The New God Argument at Sunstone 2008 by Lincoln Cannon and Joseph West of the Mormon Transhumanist Association. Mormon Transhumanists, and to some extent all Mormons, don't insist on a supernatural God outside the universe and are quite open to the possibility of a natural God existing and evolving within the physical universe described by science. Mormon transhumanists demonstrate the possibility of peaceful coexistence of science and religion, and I only wish some of those who come from the science camp would show a similar openness of mind.

Don't miss the Document, the Handouts and the Slides. Lincoln and Joseph argue that we should "trust that an advanced civilization more benevolent than us probably created our world". Not supernatural creation, but engineering work: the authors make many references to the fact that, as we advance toward the capability to create synthetic worlds populated by sentient beings, more and more thinkers are beginning to seriously consider the possibility that we, ourselves, may be sentient beings in a reality computationally created by a higher level of reality.

Their argument is basically similar to the argument given by Nick Bostrom in Are You Living In a Computer Simulation?, with more assumptions on the motivations of our "creators", for example: "If any advanced civilization probably creates many worlds like those in its past then any advanced civilization that created our world probably acts toward us with at least as much benevolence as it expects any advanced civilization that created its world should act toward it". Note: "creates many worlds like those in its past" is used mainly the sense of computational simulations of past history, with sentient inhabitants, but also in a more general sense, including for example Jurassic Park -like recreations of past history in physical reality. In both cases, the sysops would have godlike powers over our reality, and perhaps they would remember to make periodic backups.

I don't relate well to arguments based on guessing the motivations of unknown and perhaps unguessable others, but I think the really strong argument is this: "As the computing power available to us continues to advance exponentially, it seems reasonable to suppose that one of the things we might do is run increasingly detailed simulations of our world and worlds like it. As the level of detail increases and the user interface improves, it would become ever more difficult to discern any difference between our world and the simulated worlds, to the point that, for all practical purposes, “simulation” or “virtual” would no longer accurately describe those worlds or the apparently sentient persons in them. Furthermore, if an advanced civilization simulates many such worlds, indistinguishable in degree of detail from its own world, then the advanced civilization itself is much more likely to be one of many simulated worlds than it is to be the only hypothetical non- simulated world. In other words, an advanced civilization that simulates many worlds like those in its past is almost certainly not the first or only to do so, and thus is probably simulated itself".

Perhaps the argument can be made even simpler: let's assume that physical reality is one, and that physical reality permits the creation of synthetic worlds populated by sentient beings. There is no reason to assume that there can be only one synthetic world, so the number of synthetic worlds can be higher, perhaps much higher, than the number of "real" worlds (one, by assumptions). It seems reasonable to think that the number of simulated sentient beings can be (much) larger than the number of "real" sentient beings, hence you and I are probably living in a simulation (but the conclusion, or assumption, on the benevolence of our creators is lost. Or something like that. However, I suspect that there is no fundamental difference between physical and simulated realities: our matter and energy may be "their" bits and cellular automata.
Posted by Giulio Prisco at 8/12/2008 No comments: